Empty nest retirees often downsize their living space, but Lani and Norm Kass went the other direction, expanding their single-family house in McLean. “Our family is growing now,” said Norm Kass. “We have grand-kids and we like to have them over and we wanted a home that could accommodate them.” They contracted with Michael Nash Design, Build & Homes to convert their empty nest into an all-seasons retreat. The project earned Michael Nash, president of the company, the 2010 National Association of Remodeling Industry Capital Contractor of the Year Merit Award for entire house remodels under $250,000.

Located in an established McLean neighborhood near Pim-mit Run, the Colonial was built in 1983. After retiring and seeing their three adult children start their own lives, the couple considered selling — but their children live close, which means frequent visits from grandchildren.
“We decided we wanted to stay in this area and keep the house,” Kass said. “We just wanted to make it more functional and more practical.” “They outgrew their living space,” said Nash, who had worked with the family more than a decade ago, remodeling the kitchen and family room. CEO Sonny Nazemian said the goal was to create a more open floor plan and enhance the flow of the main-floor space. It was important to accommodate the couple’s desire to host family functions and maintain an active lifestyle.

The extensive renovation included updating the master bathroom, mud room, basement recreation room, secondary bathroom, deck, backyard, kitchen and exterior. But the primary focus was on first-floor common areas, especially the kitchen.
“The previous kitchen was [a] narrow semigalley,” Nazemian said. The kitchen gained a 4-foot bumpout and lost a 20-foot back bearing wall, which allowed the layout to be changed. Appliances were moved to create a better work triangle. A large island with cooktop and second-tier overhang was installed. The kitchen also now is viewable from the sitting room, family room and the outdoor spaces.
“We brought the kitchen out of isolation,” Nazemian said. Now the kitchen remodel and family room space flows seamlessly through French doors that lead to a screened corridor and connect to a gazebo. The screened porch and gazebo were constructed with Trex, a low-maintenance decking material. Beaded-cedar ceilings add warmth to the area and complement the mahogany wood floors in the family room as well as the mahogany-stained kitchen cabinets. Stairs from the gazebo lead to a flagstone patio in the backyard.
Previously, the backyard was unusable because of runoff generated by a large hill that ran from a neighboring yard. Nazemian said they excavated the entire yard to create a level surface. A 5-by-40-foot retaining wall covered with ledger stone was built between their yards, and an underground drainage system redirects water runoff from the patio. Sliding glass doors from the patio lead back into the lower level of the house and a remodeled basement, complete with exercise area, media room and wet bar.
The home’s exterior received new shingles, gutters, down spouts and siding. “We are extremely happy,” Kass said.”They left the shell, but they did a total overhaul. We basically have a new house. 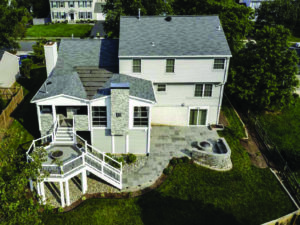