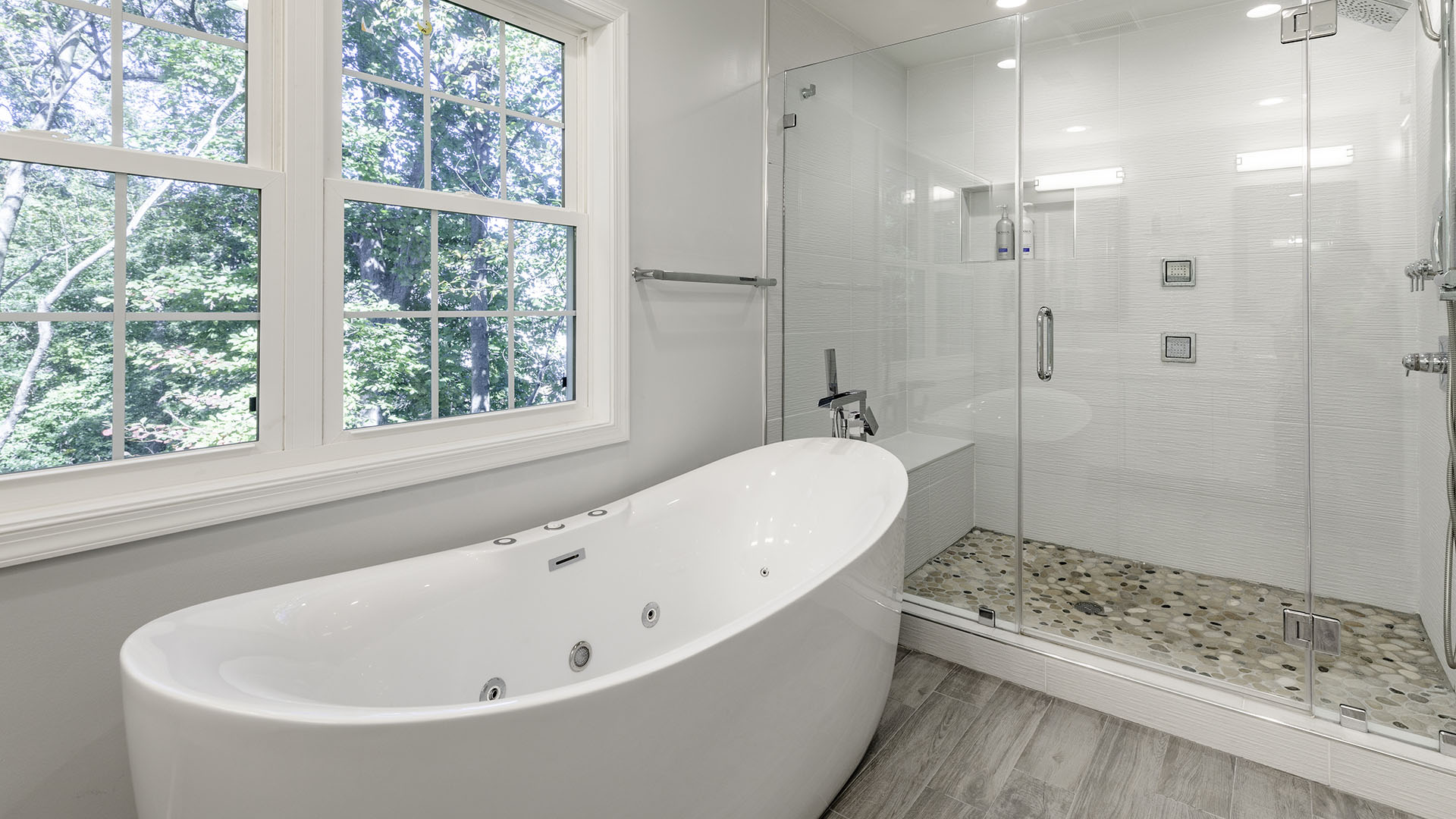 These homeowners have lived in their Dunn Loring, VA homes for years. This home is oddly situated on a pipestem with very limited setback and land space to deal with.

They have been contemplating whether to move or add more space. They loved their neighborhood and having their relatives close by has kept them in this house.

The biggest challenge of this project was to convince the zoning authority that boundaries for this lot setbacks were incorrectly designated and that they had to be designed and re-evaluated.

All utilities were located on the left elevation of the existing dwelling and had to be dogged out and relocated before any construction could begin. Anyone who has dealt with utility companies before knows that this can be a very involved and lengthy process.

Their design of choice was a three-story addition with front and back stone patios.

Our design team listened to their needs and came up with the maximum space allowed to satisfy their needs.

The 13’x29’ three-story addition was constructed on the right side of the dwelling, with the basement level dogged out and made level with the current basement. This new space was designed to be their in-home music studio. It’s surrounded by lots of windows and a French door to the new backside flagstone patio and jacuzzi area.

The side concrete wall was removed and supported by new structural beams to create a seamless connection with the old space. The furnace was relocated to allow a larger pathway. The Basement bath was enlarged and redesigned to have a walk-in shower and new facilities; an area of the existing basement was redesigned to be separated by four sets of sliding glass doors, giving a multipurpose use for the overnight guests of the Puja room.

Walls were busted open to the main level addition. We installed support columns and beams to connect the new sunroom to the old living room. The sunroom is wrapped around with lots of windows and a set of French doors in front to walk to an elevated round flagstone patio that was built in front of the house. There is a large set of French doors leading to the future deck on the backside. The coffered ceiling with trim molding and recessed lights have made this living space glamorous and welcoming. We have installed wide plank flooring to create a seamless connection.

The front staircase was redesigned and covered with matching wood floors and a new railing.

This needed addition was covered with a matching brick facade at the front and the sides to have a very seamless transition to the existing home.

A new HVAC system was implemented to cover this three-story addition and independent of the existing furnace. All new plumbing and electrical lines were installed to accommodate the new master suite bath on the third level of the new addition.

The third level had a small bedroom that we converted into a new corridor that led to the New Master suite bedroom. It has a vaulted ceiling, Arch transom, 12-ft French door, lots of lights, and a Juliette balcony on the right side of it. The back end was designed to have his-and-her custom closet areas.

The old bedroom was converted into a Master bathroom with a bubble freestanding tub under a set of windows overlooking a wooded backyard. There’s a separate commode closet, a large walk-in shower with all amenities, and a double vanity counter.

Our design staff went all out to deliver the most attractive tiles, flooring, and fixtures that the homeowners desired.

The curb appeal of the round elevated stone patio with a lead walk and exemplary seamless front elevation connection is the most admirable feature of this project for the couple and the neighborhood.